What follows is the Airship Community Update for December 2020, brought to you by the Airship Technical Committee.

The Airship blog is a great way to keep up with what's going on in the community. The Airship community publishes blog posts regularly, including the Airship 2.0 Blog series. These blog posts introduce the changes from Airship 1.0 to Airship 2.0, highlight new features, and detail each component's evolution. The recommended reading order for these blogs is listed below. It begins with the lessons learned on the road to Alpha, to address the changes made from the original blog series 1-6.


AIRSHIP CONTAINER AS A SERVICE

Two operators will manage the lifecycle of Virtual Machines and their relationship to the cluster: vNode-Operator (ViNO) and the Support Infra Provider (SIP). These operators are new projects to the Airship ecosystem and were migrated to OpenDev earlier this month.

Now, you may be asking why are we creating two more projects? It's a fair question, so let's discuss the motivation behind these projects. These projects focus on a particular user of Airship, those that want to support multi-tenancy.

Airship was created as a solution to managing Kubernetes workloads, and over time a lot of these workloads have become Kubernetes native. Some of those workloads, however, have needs that exceed those of individual Kubernetes clusters, which limits hard multi-tenancy. An example of this would be a Custom Resource Definition (CRD), a cluster-wide object that does not facilitate namespacing or other ways of segregating it. This can lead to issues if one cluster wishes to consume a particular version of Istio, but that version of Istio would conflict in a different cluster.

So we need a way to have multiple Kubernetes clusters, preferably in a single hardware region. We examined several ways to segregate these out, including:


We felt that encapsulating smaller clusters over a cluster directly deployed on bare-metal was the right decision, supporting aggregating hardware to perform common Ceph service consumed above, and a more granular lifecycle control of clusters operating tenant workloads. The question becomes, how do we split the bare-metal nodes up into consumable units for Cluster API (CAPI) to provision and participate in multiple Kubernetes clusters?

Tools like Kubevirt were examined, but we felt that due to the specialized nature of a lot of the workloads we run, the benefits were outweighed by the issues encountered to enable low-level tweaking of how Virtual Machines operate, leading to a significant amount of abstraction.

It became apparent that a simpler, cruder, deployment would make more sense for us. New operators, SIP and ViNO were conceived as a solution.

So what do each of these operators do, at a thousand-foot view?


These projects are related to each other through CAPI, which will provision via Metal3 against the VMs created by ViNO and labeled by SIP.

Look forward to more information on both of these projects in an upcoming blog post by Pete Birley, expected in January. In the meantime, learn more about these projects which were both introduced at the PTG in October through the recording below:

As Airship's design has evolved, so too has the need for an evolution of our issue tracking. Historically Airship 2.0 development issues were labeled with a "component/xxx" label, but those have become stale. In an attempt to identify outstanding work and priority, we are dropping the component labels in favor of new categories, in order of importance, for all remaining unassigned issues:


This activity is contributing to the General Availability (GA) milestone. Below is the overall status of the GA milestone, which does not include the breakdown of already completed Alpha and Beta milestones: 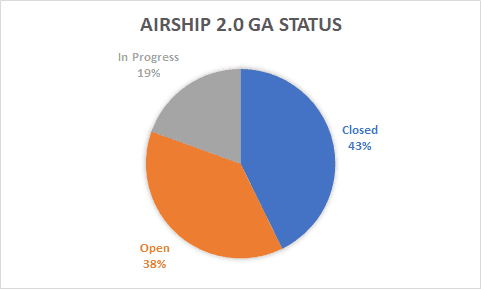