In our last Airship v2.0 evolution post, we promised we would dive into the evolution of how we will do cluster deployment in a Kubernetes-native way. Before we go into that explanation, we want to spend some time discussing the current state of the project. Airship 2.0 has now reached our Alpha Milestone. Completing the Alpha Milestone is a realization of our core goal of delivering the initial phases of the life cycle management utilizing airshipctl and successfully integrating with other projects such as Kustomize, Cluster API, Metal3-IO, Clusterctl, and others. Our integration needs and expectations on these projects led us to several successful collaborations outside the Airship community to reach this milestone.

Arriving at these milestones wasn’t without fallings, going down different paths we’ve learned, tried, failed, regrouped, redesigned, reimplemented, and when appropriate changed course. These lessons and course changes support Airship 2.0’s simplification goal as it relies on integrating with projects that are themselves evolving at this time. One of the core expectations of the Airship community is to take advantage of and integrate functionality when available. It means we remain vigilant in keeping abreast of the cloud-native landscape, looking to incorporate new projects when appropriate and changing course to align ourselves with projects we’ve already integrated with while still delivering something functional.

Given some of these course corrections and adjustments, we thought it is worth briefly touching upon the impacted points and approaches we made in some of the previous blog posts. We believe it’s worth specifically revisiting:


Shipyard - an Evolution of the Front Door

In this blog post, we mentioned that the airshipctl utility operates on a Kubernetes cluster security context. The airshipctl utility is the main entry point for bootstrapping a cluster, collecting and pushing documents, and managing workflows. A lesson we learned in Airship 1.0 was that expressing a site as the complete series of document declarations for that site was challenging to manage and mentally digest. In Airship 2.0, we represent lifecycle management as a series of phases that simplify how a Kubernetes cluster is built and subsequently managed. Phases help people deal with a much smaller document set that is granularly scoped to a particular objective. We will dive deeper into phases, the value they provide, implementation and how they simplify lifecycle management in a future post.

In this blog post, we discussed the expected evolution for Armada, the path led us to the need to embrace Kubernetes CRDs, integrate with Helm v3, and take advantage of a CNCF workflow engine like Argo. We also touched on rewriting Armada in Golang. As part of this intended evolution, we spoke to several members of the Helm community. We got their blessing to propose an official in-tree or next-to-tree helm-operator, for which we would provide a small proof of concept skeleton. In this case, remaining vigilant paid off, and while doing our due diligence of identifying comparable projects, we found a candidate project upstream. The flux community spearheads this vibrant community project, it's called the helm-operator, and it achieves most of our needs outlined in this post.

Specifically, the flux helm-operator has the following capabilities:


It does, however, leave some gaps in functionality from what Armada provided:


These gaps within the realm of Airship can be closed utilizing the phase mechanism, and as per our community expectation, we are now active participants in these communities. We will try to achieve some of our goals in these gaps over time.


With the Airship Alpha release, we can deploy a cluster of 44 bare-metal hosts solely by driving the lifecycle utilizing airshipctl. The Alpha release pulls together several achievements within airshipctl such as:


Airshipctl has successfully integrated with: 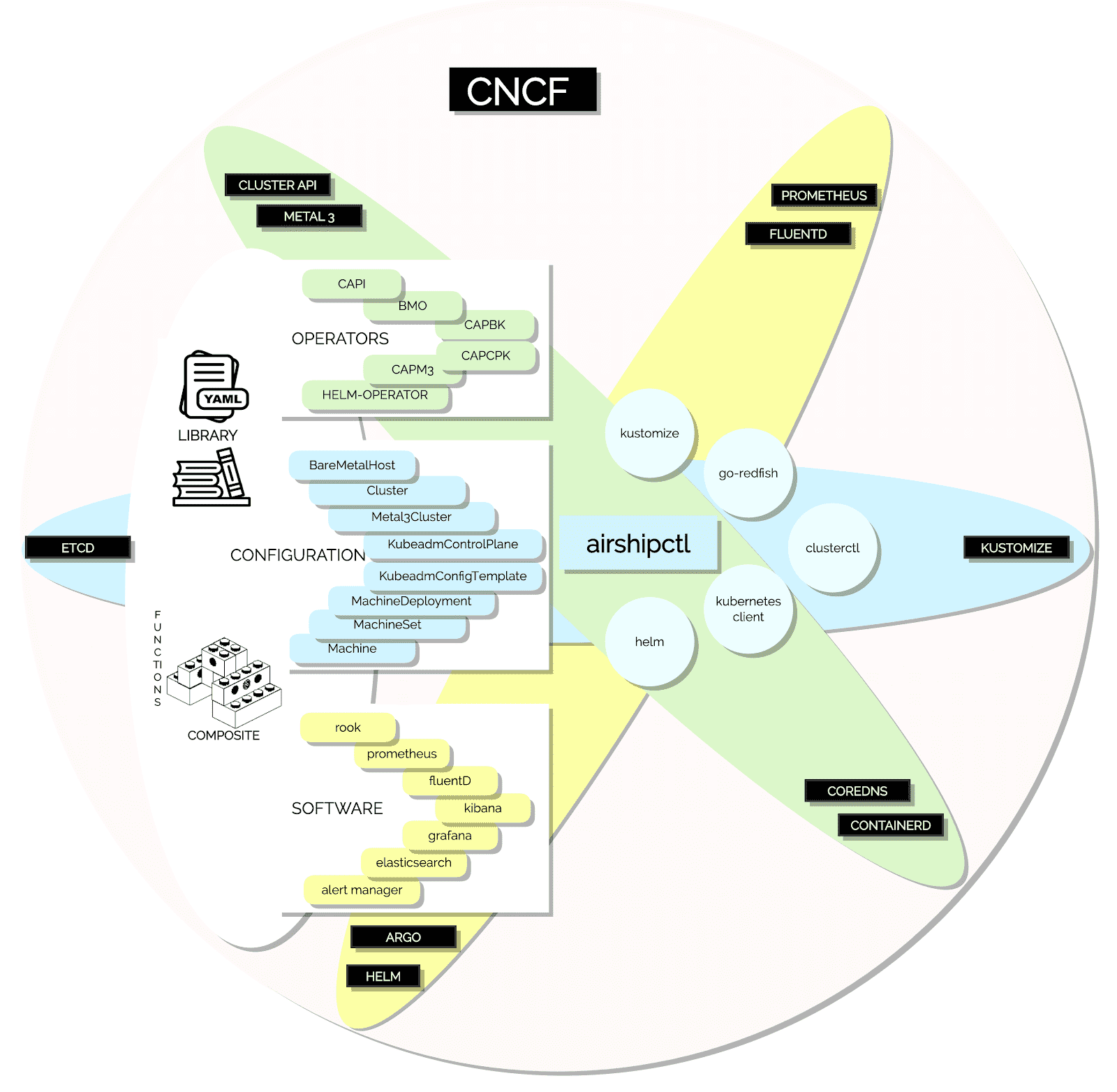 In Airship 1.0, we developed Promenade. It is a Kubernetes cluster deployment tool with the following goals:


Promenade was born out of the need for a configuration-driven approach to deploying a highly available Kubernetes cluster. Kubeadm was still using an imperative method, with limited capability for HA. Kubeadm has come a long way since then, and working towards incorporating that installation mechanism makes sense now.

Using the Cluster API declarative custom resource definition that defines our control plane, we can extend it enough to achieve high availability while simultaneously taking advantage of more widely used community tools for control plane provisioning like Kubeadm. We do this by leveraging the PreKubeadmCommand capability within CACPK to orchestrate a highly available IP address on top of Baremetal hosts that can be consumed by Kubeadm later in the process.

The interface for Cluster API has also improved our stance at scaling up and down nodes. The control plane can be scaled up by merely adjusting a replica count, provided you have enough BareMetalHost objects within inventory to take advantage of. Similarly, worker nodes can also be created simply by creating MachineDeployment document sets. Airship will give more value here on top of the Cluster API in terms of facilitating the de-duplication and even some generation of these documents from a more concise description of your deployment needs in the beta release.

In the next blog post, we’ll explain Airship phases and start deep diving into using Airship to manage the lifecycle of a cluster and its applications. We’ll begin to explain the details step by step of using Airship and the document model required to achieve a small bare-metal cluster and perform some basic lifecycle scenarios using airshipctl.