What follows is the Airship Community Update for the month of June 2020, brought to you by the Airship Technical Committee.

The Airship blog is a great way to keep up with what's going on in the community. The Airship community publishes blog posts regularly, including the recent Airship 2.0 Blog series. These blog posts introduce the changes from Airship 1.0 to Airship 2.0, highlight new features, and detail the evolution of each component. The first six Airship 2.0 Blog posts are already available, and illustrate the design thoughts on the road to the alpha milestone:


Stay tuned for more exciting news on the Airship blog series as Airship 2.0 progresses through the beta milestone and beyond!

On 04-05 June Airship participated in the OSF hosted Virtual PTG. The PTG facilitated productive cross-team collaborations with StarlingX, Ironic, and the Edge Working Group. Feedback provided to the PTG organizers by attendees has been very positive. What follows is a summary of the PTG:

In general, the attendees were satisfied with the times selected striking a good balance across timezones, between virtual and PTG. Most attendees were also in favor of the focused two days PTG that did not require full focus for an entire week.

Conversations with StarlingX included an update on Airship 2.0 and laid out the deprecation cycle for Armada. We are encouraging the StarlingX community to check out the Flux Helm Operator which will be replacing Armada in Airship 2.0. For more details on Armada's evolution from Airship 1.0 to Airship 2.0 see this blog post.

There was Airship representation at the Edge Working group, to provide an update on Airship 2.0 and how it targets various edge computing use cases.

Airship worked closely with the OpenStack-Helm team with a focus on code review and working through security scope.

Representing the Airship community was Noor from Dell at the Ironic sessions. These sessions highlighted some potential future paths forward with vendor variations of Redfish.

The planned agenda here was a perfect fit for the allotted time.

If you are evaluating or running Airship, share your feedback in the Airship User Survey! This survey provides users an opportunity to provide anonymous feedback to influence the community and software direction. By sharing information about your configuration and requirements, the Airship Working Committee will be able to advocate on your behalf. The 2020 survey results will be presented at the Fall Summit, November, 2020. Take the Airship User Survey to be included in this round of analysis.

The Airship community adopted formal governance in 2019 leading to the creation of two committees responsible for helping to guide Airship projects. Each of these committees is elected by the community to serve for one year at a time.

Over the next two weeks the Working Committee (WC) is organizing an election to fill all five seats for the 2020-2021 Technical Committee term. Earlier today the first phase, nominations, began and was announced via the mailing list which you can subscribe to here.

Anyone who has demonstrated a commitment to Airship (community building, communications, or had code merged to the Airship project repositories) within the last 12 months is eligible to run for the Technical Committee (TC). Anyone who is a Contributor (someone who has had changes merged within the last 12 months to any Airship project repository) before the election will be eligible to vote for the TC candidates. There are no term limits, but in order to encourage diversity, no more than two of the five seats can be filled by any one organization. The TC will meet regularly in an open forum with times and locations published in community channels.

Next month, in July, the current Working Committee (WC) term will end, and elections to fill all five seats for the 2020-2021 Technical Committee (TC) term will be held.

Anyone who has had changes merged within the last 12 months to an Airship project is eligible to run for the Working Committee. Anyone who is a Core Reviewer of any Airship Project before the election will be eligible to vote for the WC candidates. There are no term limits, but in order to encourage diversity, no more than two of the five seats can be filled by any one organization. The Working Committee will meet regularly in an open forum with times and locations published in community channels. 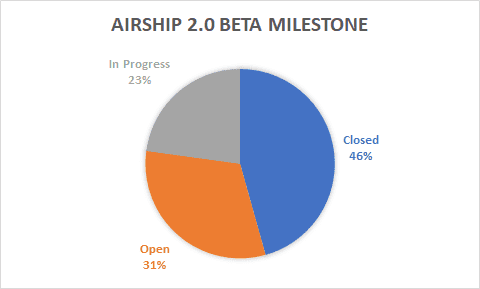