What follows is the Airship Community Update for September 2020, brought to you by the Airship Technical Committee.

The Airship blog is a great way to keep up with what's going on in the community. The Airship community publishes blog posts regularly, including the Airship 2.0 Blog series. These blog posts introduce the changes from Airship 1.0 to Airship 2.0, highlight new features, and detail each component's evolution. The recommended reading order for these blogs is listed below. It begins with the lessons learned on the road to Alpha, to address the changes made from the original blog series 1-6.


Stay tuned for upcoming blog posts as Airship 2.0 progresses through the beta milestone!

The Technical Committee is pleased to announce that the Airship 2.0 beta milestone completion is imminent. This milestone included 135 issues, with the last open issues being targeted for completion by the end of September. 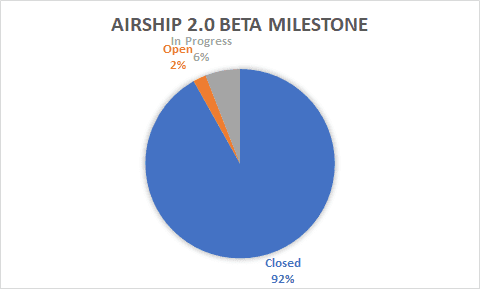 Each year the Airship community elects a new Technical and Working Committee, and new members to the Technical and Committee bring fresh ideas with them. Last month, in August, The new Working Committee met to discuss ways the current meeting agenda to ensure the scheduled times, frequency, and subject matter were providing value to the Airship Community in the best way possible.

Results of these discussions led to changes in two meetings:

This meeting, previously scheduled on Fridays, has been discontinued for 2020. Airship UI design topics have will now be discussed during Airship Open Design meetings. Grooming sessions for Airship UI will now occur during the Airship Flight Plan Call. Please see the original announcement here.

This meeting, previously scheduled every Tuesday, has been changed to a bi-weekly schedule. Please see the original announcement here.


Please take a moment to review the Wiki for all of Airship's sessions.

The Summit is focused on open infrastructure integration. It has evolved over the years to cover more than 30 different open source projects, including Airship, Ansible, Docker, Kata Containers, Kubernetes, OpenShift, OpenStack, StarlingX, Zuul, and many more.

The Open Infrastructure Summit is structured around relevant use cases, training, and complementary open source projects. Collaborate with people from more than 30 open source communities and meet the users, developers, and vendors who build and operate open infrastructure.

The full schedule is available for review here.


Register for free, and make sure to mark your calendar for October 19 - 23.

The Project Teams Gathering (PTG) is an event organized by the OpenStack Foundation. It provides meeting facilities allowing the various OSF project teams (user workgroups, development teams, operators, SIGs) to meet in-person, exchange, and get work done in a productive setting. It lets those various groups discuss their priorities for the upcoming cycle, assign work items, iterate quickly on solutions for complex problems, and make fast progress on critical issues. The co-location of those various meetings, combined with the event's dynamic scheduling, makes it easy to get specific people in the same room to discuss a particular topic or participate in multiple team meetings. Evenings allow for relationship building and problem sharing.


Register for free, and make sure to mark your calendar for October 26 - 30.