What follows is the Airship Community Update for February 2021, brought to you by the Airship Technical Committee.

The Airship blog is a great way to keep up with what's going on in the community. The Airship community publishes blog posts regularly, including the Airship 2.0 Blog series. These blog posts introduce the changes from Airship 1.0 to Airship 2.0, highlight new features, and detail each component's evolution. The recommended reading order for these blogs is listed below. It begins with the lessons learned on the road to Alpha to address the changes made from the original blog series 1-6.

Each year the Open Infrastructure Foundation provides an annual report to the community, including project developments, foundation news, and letters from the Executive Director. You can find the 2020 OpenInfra Foundation report here.

The Airship project began issuing its annual reports, included in the yearly OpenInfra Foundation report, at the end of 2019. The 2019 Airship Annual Report is available here.

Last month Drew Walters authored the Airship 2020 Annual Report. I encourage you to read the full report; a few of the highlights you'll find include:

Since the Airship IRC weekly meeting changed from a weekly schedule to a biweekly meeting schedule, The Working Committee thought it would be helpful to change the agenda etherpad to an easier to remember URL. Instead of having an etherpad for each meeting date, there is now a single etherpad for all IRC meetings. The Airship Technical and Working Committee meetings also have an irregular meeting schedule (monthly and biweekly, respectively) and have adopted the same standard etherpad format.

You can find the updated etherpads below:


For a full list of all the community meetings and design calls, check out the Airship Wiki.


This activity is contributing to the General Availability (GA) milestone. Below is the overall status of the GA milestone, which does not include the breakdown of already completed Alpha and Beta milestones: 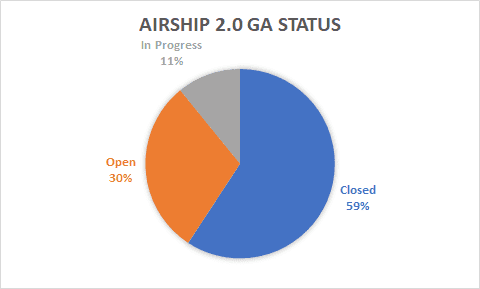