Hear the latest updates on Airship 2.0 from the Open Infrastructure Summit keynotes!

What follows is the Airship Community Update for July 2020, brought to you by the Airship Technical Committee.

The Airship blog is a great way to keep up with what's going on in the community. The Airship community publishes blog posts regularly, including the new Airship 2.0 Blog series. These blog posts introduce the changes from Airship 1.0 to Airship 2.0, highlight new features, and detail each component's evolution. The first six Airship 2.0 Blog posts are already available, and illustrate the design thoughts on the road to the alpha milestone:


Stay tuned for more exciting news on the Airship blog series as Airship 2.0 progresses through the beta milestone and beyond!

Each quarter the OpenStack Foundation hosts a community meeting where the latest news about OpenStack and community projects can be shared. On 25 June, Airship presented a project update alongside OpenStack, Kata Containers, StarlingX, Zuul, and pilot project OpenInfra Labs.

Catch up on the community meeting with these resources:


Anyone who has had changes merged within the last 12 months to an Airship project is eligible to run for the Working Committee. Anyone who is a Core Reviewer of any Airship Project before the election will be eligible to vote for the WC candidates. There are no term limits, but any organization can fill no more than two of the five seats to encourage diversity. The Working Committee will meet regularly in an open forum with times and locations published in community channels. 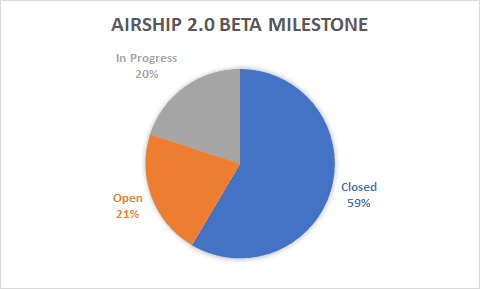