Join the Airship community at the OpenInfra Summit in Berlin, June 7-9!

What follows is the Airship Community Update for the month of March 2020, brought to you by the Airship Technical Committee.

As KubeCon has been postponed, details here the Airship community will be holding a virtual meet-up instead and will serve much the same purpose as the originally planned KubeCon face-to-face team meeting. We hope that this virtual meeting will lead to increased participation and more valuable conversation.

The goals of the meet-up include:


The full agenda can be viewed here, please add anything you would like to discuss.

Airship is a collection of loosely coupled, but interoperable open source tools that declaratively automates cloud provisioning. Airship is designed to make your cloud deployments simple, repeatable, and resilient.

The primary motivation for Airship 2.0 is the continued evolution of the control plane, and by aligning with maturing CNCF projects we can improve Airship by making 2.0:


To do this, we are moving the purpose-built service logic for lifecycle management developed in Airship 1.0 into native objects living in Kubernetes, building a new intelligent client airshipctl, and a new UI airshipui to interact with those objects. This evolved control plane will reduce the impact of upgrades, improve the operator experience and align with the overall CNCF direction.

By aligning with the CNCF direction


For more details, check out the Airship 2.0 preview video here.

In the February Update, we mentioned that Airship 2.0 progress is tracked in Github Issues. 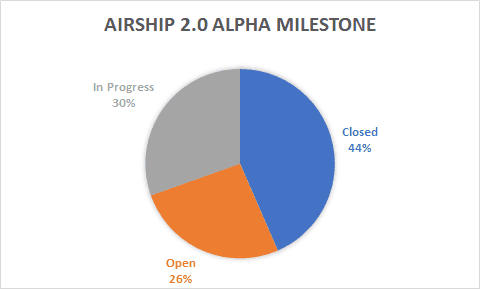 In the OpenStack Foundation, communication by IRC is commonplace. The airship community maintains the #airshipit channel on Freenode IRC. As the Airship2 project grows, there is an increasing need to collaborate with projects which use Slack as their primary communication platform, such as metal3.io.

To make communication in both Slack and IRC convenient, the Airship community has also set up a Slack channel that mirrors back to IRC, giving community members the option to use just one platform to communicate within Airship and with other communities supporting specific projects.

You can join the new Slack channel here.

The Airship community is committed to confirming, resolving, and disclosing all reported security vulnerabilities.

In addition to this new process, we'd like to share the existing tools in place that help Airship proactively scan for vulnerabilities. These tools include: